Step Eight: Aer Lingus and I broke the plane. A bit of an exaggeration, but I broke my headrest. I probably should have said something BEFORE take off, but I was not going to be the reason that the plane was delayed.

And for those that just hate having to purchase deli boxes on a flight … Aer Lingus charges you for your soda, coffee and water. Plain old tap water is €2.60 (convert to $ by multiplying an average 1.2.)

As soon as we touch down, I will be in Ireland. But the day isn’t over … Up for 24 hours and we have yet to face the next big obstacle – 55 miles from the Shannon airport to Cashel. That means driving…. Do I need to say anything else? 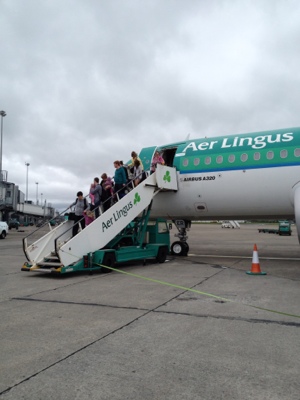