Ireland … Saint Nicholas? That’s what I thought when I read a couple of sentences in a travel book. It stated that near Jerpoint Abby, County Kilkenny, there was a grave that was reported to be that of St Nicholas’s. From there, I did some Internet searches and further researched the legend.

As it happens, Jerpoint is about an hour’s drive from where I am staying. In the past month, I have linked up with Jerpoint Park on Facebook. Jerpoint Park contains not only a grave, but also the ruins of St Nicholas Church. So, I headed that direction Sunday, December 23rd … one must visit the St. Nicholas at Chrismastime! 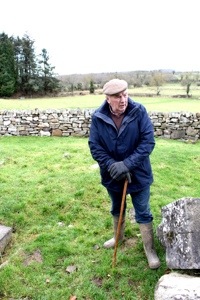 Joe, Owner and Best Guide in Ireland!As I arrived, it could see the church ruins, as well as Jerpoint Abby in the background. I was met by the owner, as well as another visitor, and we proceeded to walk through the park. The afternoon was an early Christmas gift; present were two people that not only would put the historical place and legend into perspective, but were gracious to answer my questions.

The legend states that two Crusader knights moved St Nicholas’s remains from Bari to Newtown Jerpoint and buried those remains next to the town’s church that was named after the saint … St Nicholas’s Church. The slab has a primary center figure that is wearing garments of a bishop. On either side of his head, are two faces believed to be the Crusader knights.

So, is it St Nicholas? That is exactly what I asked. At this point, it is unclear. It is believed, by many, that there are St Nicholas remains in the grave; the amount is unclear. This is due to other churches around Europe that also claim to have some of St Nicholas’s remains.

Stone slab covering St Nicholas’s remainsWhat is known is that as people have visited the area seem to discover odd occurrences of bringing people together. For me, it was the owner, but also the other visitor; Louise Nugent, a PhD and Archaeologist who travelled that day to work on a new new article. Her speciality … Pilgrimages of Medieval Ireland. Both had great knowledge of the practices and influences of the times, politics and architecture.

While my focus was visiting the tomb of St Nicholas, I was introduced to another gem. The church was, at one point, on the edge of a medieval village called Newtown Jerpoint. It was a wealthy and vibrant town that was nestled on the edge of two rivers. What has been discovered in the past couple of years is a footprint of the village still intact. See a second blog post on Newtown Jerpoint.

Here are some websites for you to explore: