My goal today was the Kilkenny Craft Trail. Unfortunately, off season and the holidays can mean that things are closed. However, it wasn’t all lost. I had a backup plan to swing by a couple of places. Jerpoint Abbey was one of those places.

On Sunday, I spent time at Jerpoint Park where across the street (and through the trees), I could see Jerpoint Abbey. The day was coming to a close, so I chose not to swing by and check it out. Today, the Abbey, located just outside of Thomastown, County Kilkenny, was on my way from one town to another.  So, it provided the perfect opportunity to have a look around.

The Abbey was built in the 12th century, with the tower and cloister added around the 14th/15th centuries. There are a variety of graves; some hundreds years old, some within the last decade. There is work currently being done, so areas were partitioned off. However, I was able to see through the windows and photograph the inside, as well as a stone carving.

Some photos of Jerpoint Abbey… 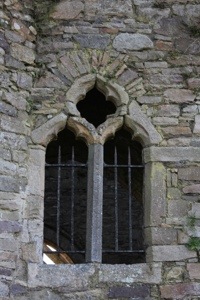